The Land of Lakes and Volcanoes

Nicaragua takes its name from Nicarao, chief of the indigenous tribe then living around present-day Lake Nicaragua. A friendly and peaceful country that at times, received an undue share of negative press, Nicaragua is really one of the safest places to visit in Central America. With more than 2 decades of political stability, this democracy has moved steadily forward, leaving behind the war-torn ’80’s, remembered as one more chapter in its turbulent past.

The nickname “land of lakes and volcanoes” describes this beautiful and fascinating country well. Two great lakes, Xolotlán (Lake Managua) and Cocibolca (Lake Nicaragua) occupy roughly 10% of the country’s surface area and are the largest in Central America. Running nearly parallel to the pacific coast is a chain of 58 volcanoes, six of which are active. The country also boasts the longest rivers in Central America, vast coastal lagoons, and hundreds of miles of seacoast. As the largest and lowest Central American country, Nicaragua is essentially an emerging “land bridge” between the Atlantic and Pacific oceans. Centrally located between North and South America, Nicaragua has benefited from the astonishing blend of flora and fauna from the two continents.

Nicaraguan Economy
Nicaragua is primarily an agricultural country, but construction, mining, and general commerce also have been expanding strongly during the last few years. The rapid expansion of the tourist industry has made it the nation’s third-largest source of foreign exchange. Central and Northern Nicaragua is currently prime for real estate investment.

Nicaraguan Culture
Nicaragua’s cultural wealth is without a doubt one of its major attributes. During your stay with Surf Tours Nicaragua, we will take some time to explore the richness of its culture, rich with beauty and tradition. Its beautiful colonial cities will transport you to a bygone era. Besides friendly smiles and Nicaraguan hospitality, another “Nica” feature is the festive spirit. Myths, dances, music, and ritual makeup Nicaraguan folklore. People often say having visited Nicaragua that people are the reason that they would consider returning, and we couldn’t agree more.

Nicaraguan Biodiversity
The rich biodiversity of the country and its 76 protected areas make Nicaragua a great destination for eco-tourism. Bosawas Biosphere Reserve, covering 700,000 hectares, is the largest nature reserve. Nicaragua is home to numerous species including 6,500 vascular plants, 43 fish, 3,716 molluscs, 50 coral, 62 amphibians, 172 reptiles, 676 birds, 251 mammals and 10 to 15 thousand insects. In all, there are 1804 vertebrate species. If you are interested, your tour with Surf Tours Nicaragua can include a visit to Padre Ramos Marine and Nature Reserve, where you will discover many of the various species of Nicaraguan biodiversity.

Nicaraguan Currency
Nicaragua’s currency is the Cordoba, named after Francisco Hernandez de Cordoba, the Spanish founder of the colony of Nicaragua. The U.S. dollar is also an official currency in Nicaragua, and it is advisable that travelers from other nations bring currency in U.S. dollars. Major credit cards are increasingly accepted throughout the entire country.

León is the second-largest city in Nicaragua and is only a 40-minute drive on the newly paved road from our main camp. It was founded in 1524 by the Spaniards as León Santiago de los Caballeros and rivals Granada, Nicaragua, in the number of historic Spanish colonial churches, secular buildings, and private residences.

León Patrimony Of The Humanity

León has long been the political and intellectual center of the nation and it’s National Autonomous University of Nicaragua UNAN was founded in 1813, making it the second oldest university in Central America. León is well worth a visit for a day or a week! There is so much to see from stunning colonial cathedrals and churches to a modern art museum spanning several revitalized colonial mansions and 2 botanic gardens. Also worth visiting is the Sandinista Revolution museum where you can climb on to the roof and overlook the central square plus the surrounding city and in the distance the volcanoes and hills.

The cathedral is the most prominent building of León. It is situated at the central plaza, and the first construction of this huge building started over two centuries ago. You can enter the building, get a tour, and set your eyes on some great architecture or enjoy superb views from the rooftop of the building. It was declared a Patrimony of Humanity by UNESCO in 2011. From the rooftop, you will have a superb view of the city of León. You can see several other churches and other prominent buildings. You can also see the area around León, including many volcanoes if the sky is clear. The roof itself is impressive, and when ascending you will understand why it took over 30 years to complete the building. 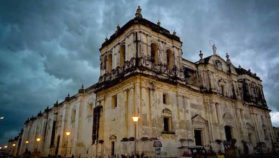 The art center of the Ortiz Gurdián Foundation is composed of several restored, colonial buildings. Each building houses different expositions of paintings, sculptures, images, and contemporary arts. The objects are lent from several other art galleries. There are also works from artists who participated in national art biennales, including pieces from an Austrian school, an Ecuadorian school, and a Peruvian school. The general entrance fee is about $1. A visit with a guide cost of about $1.50 per person for groups of up to 5 people, while for larger groups it costs $1 per person.

Get in Touch Now